Sadie started sucking her thumb when she was 4 months old. Being naive, first-time parents we thought it was cute and weren't really concerned. I seriously thought she would stop by the time she was one.

Well, here we are almost 4 years later and she is still sucking her finger. I say finger because about 6 months ago I put band aids on both her thumbs thinking that would stop her but she just moved on to her pointer finger. As of today though we are officially kicking this bad habit. Here is our solution: 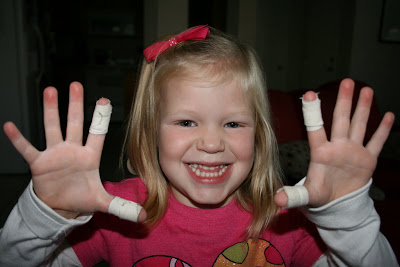 This picture was taken early in the afternoon when the athletic tape was first applied. She's happy and excited because I told her that as soon as she stops sucking her fingers she can pick out a toy at Target.

She did okay until it got around bedtime because this is the time of day when sucking her finger becomes almost a necessity. Just as I was starting to pat myself on the back for finding a way to get rid of this nasty habit, I caught her sucking her middle finger!

So after pajamas were put on this is what became Sadie's fate: 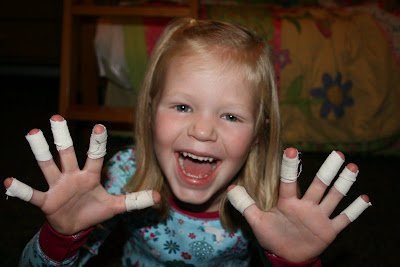 I was not going to take any more chances! Oh and don't let the smile fool you. If you look closely you can see some tears remaining from the tantrum that was only calmed down by a reminder of the promised toy.
Do I feel a little bit guilty about tucking my daughter into bed with Michael Jackson fingers? Sure. But then I remember all the humiliation I am saving her from later in life. Not to mention all the money I will be saving in dentist bills.
Wish us luck!

You are funny! Best of luck...keep me posted! Rylee is a binkie girl and I do not look forward to the day they have to go away!

This cracks my up Lindsey! I need to see you guys soon, it's been too long. Dang if only there was something I could do to stop popping my knuckles :)

Good luck to both of you!

Oh, Sadie, such empathy I have for you. I was born with my thumb in my mouth. What a comfort it was to me to suck away. Don't remember how my parents got me to stop, but I do remember it brought me great pleasure.

Oh what a great idea! Calvin sucks his 2 fingers still and he is also almost 4. I have been wondering what to do, I think I may just try that idea. Sadie sure is a cutie!