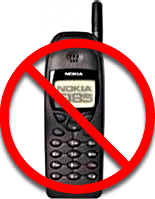 My biggest pet peeve is people with cell phones. Yeah, that's right. I absolutely can't stand it when people answer calls in public. Maybe this sounds extreme but hear me out.

Tonight I was at a church function that was intended to be a spiritual event. About ten minutes into the program, we heard that all too familiar cell phone ring. It was annoying but we moved on. Three minutes later another phone went off. I was getting upset but again, we moved past it. By the end of the night, five DIFFERENT phones had rung and disturbed our meeting. Some people got embarrassed and quickly silenced their phones while others actually got up from their seat to answer the call. Unbelievable.

I have a cell phone. I love it. I carry it with me most places but if I know I am going to be with other people, I try to remember to turn it on vibrate. I don't think there is anything ruder than answering a call when you are with someone else. To me it's like saying, "Hey, this call is much more important than you," or "I would rather talk to this person."

I have even thought about putting a box by my front door that says "Cell Phones" on it. It would work similar to the basket for shoes. When people came over, they would drop their cell phones off at the door. I understand this would be tacky and extremely overboard but you get my point.

I know I'm guilty of all of the above. All I'm saying is that I really think the world would be a better place if people used the silence feature of their cell phone more.

Well, there are exceptions to a lot of rules, but I do find cell phone use pretty annoying these days. I remember when I was on a sort-of-but-not-really date with a guy, and he answered his phone. Talk about RUDE. But he was a jerk most of the time, anyway.

What really bothers me now is the text message. I mean, do people really have to send text messages to their friends in church? (I've seen it happen before.) Or people will be talking to you, and they'll look down at their phone in mid-conversation. Oh, it'll only be for a second, but a lot of people don't even say something like, "Excuse me." They just mentally exit the conversation for a couple of seconds, and then quickly look back up at you as if they were so quick, you didn't even see them do it. Totally insulting.

Answering phones while visiting someone else's house is lame, not to mention poor etiquette. And don't give me that "emergency" excuse. Less than 1% of calls are legitimate emergencies. You're not that important. Don't let a fleeting phone call lead you to belive otherwise.

Amen to that. I couldn't agree with you more.

AMEN is right! Great blog Lindsey! If people are going to be that dependent on a little piece of technology learn some manners! I did not grow up with cell phones and must say my life was not hindered by it in any! Quit frankly they could vanish and I would not loose sleep over it!

It is pretty sad that we are so dependent on this small piece of technology now a days. They are great to have, but are a nuisance at the same time! I have a love/hate relationship with my cell phone.

I really hate it when I am in class and a cell phone rings. But the other day, I had my phone on silent, like I always do during class and it rang. It rang through the silent feature. I have "Let it Snow" by Bing Crosby as my ring so it was really embarrassing. The sad thing is that for some reason I just can't turn it off. It is like someone is cutting off my air supply. Ok kind of dramatic, but I am dependent on the little guy!