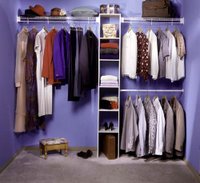 After running a few errands this morning, I had the urge to clean out my closet. It needed to be cleaned so it was a good way to spend my afternoon. Not only are all of my clothes hanging in an organized fashion but I pretty much got a new church wardrobe. You see, I had several skirts that I wore pre-Sadie that I have held onto since giving birth just in case I could ever fit into them again. My hips have defiantly grown so most of them had to go but there were a few I managed to squeeze into.

Laci came over after she got off work. She took me to Costco so that I could buy some pumpkin pies for our youth activity on Thursday. It felt like I hadn't seen Laci in a long time so it was nice to spend some time with her.

I watched Dancing With the Stars with Sadie tonight. She had fun dancing to the music. I hope Emmitt Smith wins. I think Mario Lopez is very cocky. I tried to make my first ever vote for a TV show but you have to make an account with abc.com and that seemed like too much work. I know I could have picked up the phone but I'm not that concerned with who wins.

It was a good day but I'm ready for bed.