Take me out to the ball game 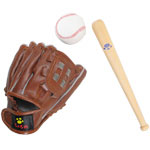 Is anyone watching the World Series besides us? Anyone interested? I probably wouldn't be watching either if Blake wasn't such a baseball nut. But, since baseball has been on at our house almost every night this week, I thought I would make it interesting.

It's down to the wire. The St. Louis Cardinals against the Detroit Tigers. I'm rooting for the Cardinals. Blake wants the Tigers to win. As of right now, the Cardinals only need to win one more game to take it all! They would be the champions! During game two, I made a little wager with Blake. I told him that if the Cardinals win, he would have to make me a romantic dinner. Okay, sounds nice. But the problem with our little bet is that Blake can't think of anything he wants if the Tigers win. Weird, uh?

So, I need your help. Do you have any ideas for Blake? He probably won't need them since the Cards are going to win, but well, just in case...

trip to hawaii...hands down haha