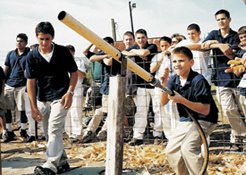 Last Thursday, I went to a Corn Maze for an activity with the teenage girls from church. I was the only women leader (it was combined with the young men) so I had the girls to myself. It took us quite some time to get through the corn maze. It was fun but also pretty frustrating. Luckily we got out before it got too dark.

Right before we were suppose to leave, one of the young men's leaders told us about a contest a local radio station was about to start. The girls got really excited so we went to check it out. It was a corn cannon contest. For those of you who do not know what a corn cannon is, let me explain; its sort of like a gun, that shoots corn. See, you stick a piece of corn in a metal tube, fill it with air, aim and shoot. The corn gets launched and it can go pretty far. It's quite thrilling.

The contest was that everyone involved got 3 shots to hit a hanging pumpkin that was about 100 feet away. Everyone that hit the pumpkin within their first 3 shots would then have a shoot off to win the grand prize.

So the story begins:

Six people went and missed. I was beginning to think this was going to be impossible. My expectations were low. Then, one of my girls hit the pumpkin on her second shot. Bam, another one of my girls hit the target on her second shot too! Then I was up. I didn't aim because I had no idea how to. I thought I would use the first shot as a gauge to figure out how to aim for my second shot. I pressed the button and WACK! I hit the pumpkin on my very first shot. I was excited but I just thought I had gotten lucky.

There were about 10 people who hit the target during the first round of competition. The second round began. Everyone had 1 shot to hit the pumpkin. I was up first. I missed. I was more disappointed than I thought I would be. My girls missed too. We stood and watched the rest of the competition, secretly cheering every time someone would miss. Amazingly, no one shot the pumpkin during the second round. Everyone had one more shot!

I was last in line. I watched as one by one, the flying corn barely missed the pumpkin. It was finally my turn. This was it. My last chance. I chose my lucky gun, and this time I aimed. I pressed the button and watched as my corn slammed right into the pumpkin! I had won! Unbelievable! I shot my arms up in victory as I heard my girls cheering me on! I'm not going to lie, it felt really good to win.

The gal from the radio station gave me a MP3 player along with passes to come back and enjoy the festivities with my family. I was feeling pretty good. All of the other finalists were given prizes and it was then time for me and the girls to head home. We stopped for hot chocolate and I showed the girls how to take advantage of all the creams the gas station provides for coffee drinkers. They were impressed.

It was a good night for me. Not only did I win, but I felt like it was a great bonding experience for me and the girls. We all had a good time and yesterday at church, they were already talking about next year's corn maze. Who knows? There might be another contest for me to win!

P.S. I warned you that this post was me bragging.

That's great, Lindsey! I bet all those girls think you're the coolest leader, and NOT just because you shot that pumpkin!

Lindsey,
Congrats on your victory! It's always nice to get free prizes too! That's awesome.

I remember my dad taking me in the gas station when I was way little and showimg me the advantage of all the creams the gas station offers. To this day I always put like 12 creams in my hot cocoa to make it extra creamy. I'm glad to know I'm not the only one who loves using coffee creamer to make my cocoa more creamy. :)

Brag away girl! That is a great story. What a fun experience. You are the coolest YW leader fo sho! (Well right next to me of course.)

Brooks and I are going to a haunted corn maze this weekend. I hope they have a contest, if I live through the corn maze I guess. You never know about these haunted backyard southern corn mazes.