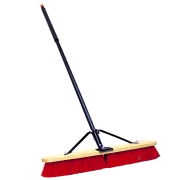 While we were driving to the Andersen's on Saturday to eat bagel sandwiches and watch the BYU football game, we had quite a scare. I was at the wheel and we were behind a white truck pulling a trailer packed full of ladders. I wasn't sure why but I had a feeling that I should get into another lane. Without thinking much of it, I put my blinker on and pulled into the lane beside that white truck. About a minute later, a huge broom came flying out of the trailer. It bounced a few times on the road and I watched as other cars swerved to get out of the way. The broom stopped bouncing and luckily no one was hurt. I don't think the driver even noticed that he was missing a broom.

Had I not switched lanes, that broom would have hit us. Who knows how much damage it would have done but I'm sure glad we didn't find out.

That is so scary. I always get nervous behind trucks with stuff (esp. ladders) strapped on...

I was almost in an accident the other day. Okay, two accidents in like 2 minutes... And they were mostly because I was so involved in talking to my sister that I was paying 0 attention. Not as scary.

I was thinking--do you guys want to come over or go to the park or do something for lunch Tues or Wed? Or Thursday, too. Just let me know!