Rubber ducky, you're the one 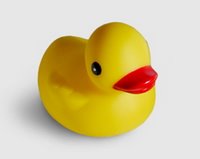 Here's a cute story for you.

Blake and I had been married maybe 6 months. Maybe. It was pretty late and we were on our way home. We needed to stop at the grocery store to pick up some milk. I was tired so Blake went in alone. A few minutes later he got back to the car and handed me the bag. He said he bought me a treat so naturally I reached in the bag to see what kind of candy bar he had gotten me. To my surprise, I found a rubber ducky. Not just any rubber ducky, it was a mommy ducky with three little baby ducks that sat on her back. It was cute but I was confused. Blake then explained, "It's for our kids!"

We held on to the family of rubber duckies and I think I can safely say it's one of Sadie's favorite toys. We keep it sitting on the bathtub so she has something to play with during her bath. It's funny though because a few times during the day I will catch her crawling into the bathroom to fetch the little ducks. She knows what she wants and she knows exactly where to go to get it.

I'm glad she likes them because I have good memories of those ducks. Blake got them when our family had just started. I could have never imagined how cute Sadie would be or what a good dad Blake would become. Well, I had an idea when I married him but he has exceeded my expectations.

So here's to many more years of playing with those little ducks!

That's a really cute story. I love those rubber ducks with the baby ducks on the back. I have gotten them for a few friends for baby showers and I think they are so cute. They are hard to find though. I'll have to remember to get a set to keep for when I have kids. :)